Start a Wiki
1D Day was an interactive livestream presentation to promote One Direction's third album, Midnight Memories. It aired on November 23, 2013 and featured the band participating in games, interviews and live performances.

On September 30, 2013, the One Direction Twitter account tweeted that the band had "big news" to announce on October 2, 2013[1]. A week later, it was revealed via Niall's official Twitter account[2] that the band would broadcast a livestream called 1D Day. A YouTube video from the band explained they wanted to "give back to the fans".

Niall explained they would be hosting a seven hour livestream, which would include celebrity guests, special features and fans had the chance to suggest ideas for the show. It was filmed live from the Global Live Stream studio in the United States.

A video[3] was posted on November 20 on One Direction's YouTube channel explaining the show and announcing special guests such as Robbie Williams, the Muppets (Mrs Piggy and Kermit), Celine Dion, Kelly Rowland and Simon Cowell. It was confirmed the show would be "seven hours long, live and "just us". The live stream would also feature "exclusive behind the scenes footage" of the band, "brand new album tracks" would be heard, "world record attempts" would be made, and many more special guests would appear. It was also revealed the show would be officially hosted on Google+ and YouTube.

One Direction's official website announced "wherever you are – there will be something you can do to take part". From October 2, 2013, there would be 7 weeks where fans could participate such as "suggesting show ideas, to creating your own videos – you can be sure we’ll give you plenty of opportunity to make your mark on 1D Day". Most of the challenges were the same worldwide, but some special challenges were held in certain countries such as Ireland, India and Turkey.

"We want you to get creative and invent a new One Direction product. If you could make anything for the guys – what would it be? An item they could use on stage? Something to improve their time on the tour bus? Or how about a product just for the One Direction fans? Whatever your idea – we want to hear it! AND see it... Create a prototype or a picture of your idea , then film a one minute YouTube video telling us all about it. Upload your videos to YouTube and share them with the band using the hashtag #OneBigInvention or email them to 1DDay@onedirectionmusic.com."

The challenge was released on the same day as the 1D Day itself, October 2, 2013[4]. The challenge[5] was to "invent a new One Direction product" for the boys or for the fans.

This challenge was judged by Louis, Zayn and Peter Jones over a Google hangout.

A couple of weeks ago we closed the One Big Invention challenge. BUT... Since the closing date we’ve noticed quite a few of you have been sending in some pretty brilliant ideas. SO... To make sure we haven’t missed any of your weird and wonderful creations - we’ve decided to re-open the challenge! You now have until Tuesday November 5th to share your ideas with us. Do you have a concept to help the guys onstage? Something to improve life on the road? Or perhaps something for 1D fans to enjoy? However unusual your idea – we want to see it. Upload your video to Youtube with the #OneBigInvention hashtag. And the good news is - if you sent your idea after the 9th October it still counts! Here are some handy tips for catching our eye:

This challenge[6] was reopened at the end of week 3 becuase of its popularity and the high number of good entries after the closing date.

"Have you seen a pony that looks like Liam? A parsnip that looks like Zayn? Or maybe a plant that looks like Harry? We want you to take photos of things you've found that look like the One Direction guys. Who needs the internet to find great LOOKALIKES when these things could be right on your doorstep! Whether you find an animal, vegetable or mineral that bears an uncanny resemblance to the guys - take a picture and show us! Surprise us, make us laugh and the picture of your lookalikey could appear on 1D Day..."

This competition was related to the 5 lookalikes that were sent around LA and during the show, they came onstage and a poll (via Google+) was asked about who looked most like their lookalike. Liam and his lookalike won.

We’re challenging you to create a One Direction music video using pretty much anything you like! We want to see just how creative you can be with the people and things around you… Could you create a video for ‘Moments’ with your grandparents? A video for ‘Heart Attack’ using your pets? A sign language version of ‘Kiss You’? Or you maybe you could put your little brothers to good use in a video for ‘I Want’? Whether you use people, pets, toys, food, animation or anything else - Remember….your new One Direction video could star anyone – or anything!

The third challenge was released on October 16, 2013[8] and it was to create a music video using "anything you like".

Many of the fan made music videos were aired throughout the show.

So who’s ready for another 1D Day challenge?! We know you’re pretty good at this one already ;) This week we want to see your best fan art – whether it’s a drawing, painting, collage, a model, sculpture, flick book, mural, photograph, you as the art work, face painting, a comic book – or something else entirely... we want to see it! Send your art to 1DDay@onedirectionmusic.com or share with the #1DDayFanArt hashtag. Handy tips to catch our eye:

The challenge[9] was to create any kind of fan art from sculptures to comic books. The end date for the challenge was November 6th at 4pm.

Some of the fan art was put up around the set of the 1D Day studio.

It’s time for your fifth 1D Day challenge... So - 1D Day will be an epic seven hour show... And what is an epic show without an epic theme tune? YES – this one is for you budding composers, producers and musicians. We want you to create a theme tune for 1D Day! You could use music software, instruments, voice, household items – whatever you like! We want you to suggest how we open and close the show – and if we like your track we might even use it on 1D Day! PLUS – you could win a SoundCloud Pro SoundCloud Pro Unlimited account for a year (worth €99!) Create a SoundCloud profile, then join the 1D Day Theme Tune group. Submit your 1D Day Theme Tune track via the 'add to group' option. Tracks will be approved to show in the group, so please be patient for yours to appear. Tips for catching our eye/ears:

Remember you can also share your sounds on social with the hashtag #1DDayThemeTune - to see what everyone else is getting up to!

The challenge was released on October 30th [10] and asked fans to write, compose and record a 30-60 second theme tune for the show with the possibility that it could be used on 1D Day.

The set consisted of a "comfy space" with multiple sofas where interviews with the boys took place; an "interactive area" which had a huge screen where the boys would talk to people on their Google Hangouts, as well as special guests such as Peter Jones and Stan Lucas; a wall with a "big world map" and multiple clocks displaying the different times worldwide; a small portion of the set had another large screen and displays of fan art; a live band consisting of Josh Devine, Dan Richards, Jon Shone and Sandy Beales and a small performance area; a small audience (although most were backstage in a special cinema room) and an "exclusive listening booth" in the form of a red telephone box where two fans at a time could listen to the new album.

The show was live and the boys were in pairs hosting different hours each. The pairings for each hour were as follows:

The very first hour and the very last hour were hosted by all the boys. 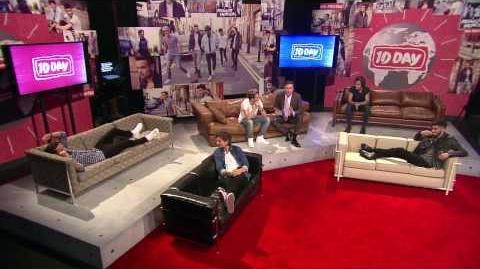 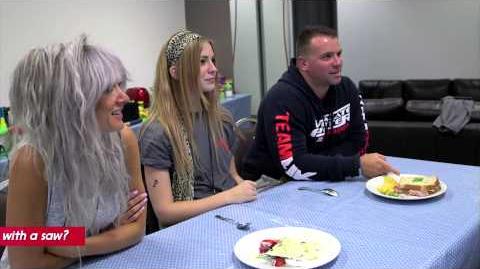 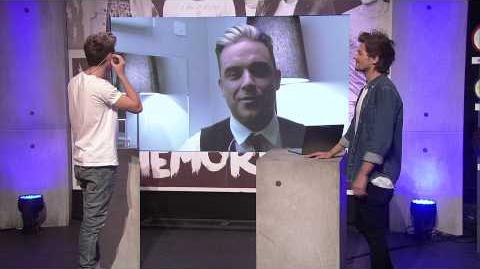 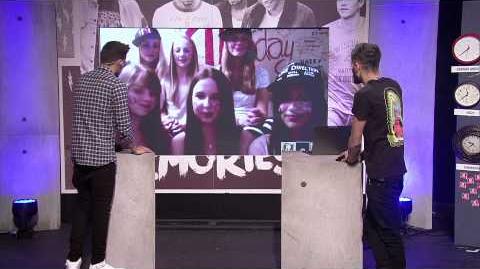 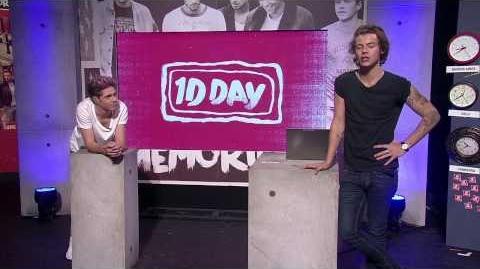 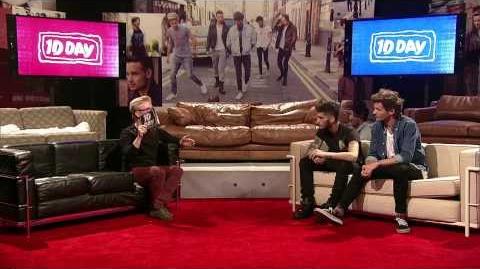 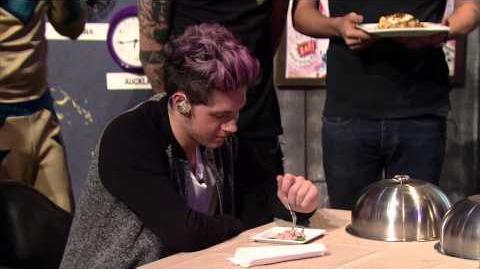 The whole show was officially available on YouTube for three days before being deleted.

Retrieved from "https://onedirection.fandom.com/wiki/1D_Day?oldid=80383"
Community content is available under CC-BY-SA unless otherwise noted.