Perrie was previously engaged to former One Direction member, Zayn Malik. They split in August 2015 after three years together.

Perrie Louise Edwards was born in the neighborhood of South Shields in Tyne and Wear, England, UK. Her parents are Alexander Edwards and Debbie Duffie. She has an older brother, Jonnie, and a younger half sister, Caitlin.

Perrie successfully auditioned as a solo artist for the eighth season of The X Factor with Alanis Morissette's "You Oughta Know." She failed to make it past bootcamp and, similar to previous seasons, was placed into a group with other rejected contestants. Perrie and Jesy were put into a two-member group named Faux Pas, but they failed to make it to the judges houses. Judge Kelly Rowland decided to put Faux Pas together with two other girls to make a four piece band called Rhythmix instead, and put them though to the judges houses, then the live shows. Due to difficulties with an organization using the same name, the band was renamed Little Mix.

They were the first group and first girl group to win X Factor. Their debut single "Wings" was a UK #1 hit, and their debut album, titled DNA, was a top 5 album in the USA. Their second studio album Salute saw them achieve more international success when it was released November 2013. Little Mix served as support act for One Direction's Apple Music Festival set on September 22, 2015. The band released their third album Get Weird in November 2015. The first single, "Black Magic" was released May 21, 2015, and reached #1 in the UK. They performed the single live on stage with Taylor Swift during her 1989 World Tour. Second single "Love Me Like You" was released September 25, 2015 and third single "Secret Love Song" was released January 3, 2016, featuring additional guest vocals from Jason Derulo. It peaked at #6 in the UK. Their fourth Get Weird single was top 11 hit "Hair", featuring a guest rap from Sean Paul. The band embarked on the Get Weird Tour in March 2016, which became the highest selling UK arena tour of the year.

Little Mix released their fourth album, Glory Days, on October 18, 2016. Four singles were released - "Shout Out To My Ex", "Touch", "No More Sad Songs" and "Power". All were top 20 UK hits, with "Shout Out..." reaching #1. The single was rumoured to be Perrie's send-off to Zayn but she later clarified the song was written before their split.

The group announced their fifth album, LM5, would be released in November 2018. The title refers to an online fan trend where an artist's untitled forthcoming album is given a temporary name consisting of the band/artist initials and the album number. The lead single "Woman Like Me" featured US rapper Nicki Minaj and peaked at #2 in the UK. Controversy arose when US rapper Cardi B revealed she was approached before Nicki to feature on the single, but turned it down as she had done too many pop features recently. Minaj and Little Mix both denied this claim. It was revealed by The Sun on 10 November 2018 that Little Mix had left Syco Music after clashing with Simon Cowell and would be releasing the album through RCA Records instead. In a subsequent interview with ASOS Magazine, the band revealed the label had asked them to flirt with American music industry figures in order to get their songs played on US radio. 1990s girl group All Saints supported Little Mix's claims saying they were told to do the same.

Perrie dated Zayn Malik from 2012 to 2015. He proposed in 2013 and they were engaged until their 2015 split. The two met on The X Factor in 2011 whilst Perrie was competing and One Direction were guest performers. Zayn first tweeted about Little Mix by showing support for them on November 19, 2011. By December, media heavily speculated Zayn and Perrie had begun dating. However, Perrie initially denied reports weeks later, responding to claims she dumped him with "How can I dump someone I barely know?"[1].

In April 2012, Zayn tweeted Perrie for the first time, saying "Tonight was fun, let's do it again sometime ;) xx". They were photographed kissing the following month[2]. In August 2012, Perrie celebrated EID with Zayn and his family. Cheating rumors rose during August and September 2012, but all appeared well in November, as the couple bought their first puppy together. They spent Christmas and New Years Eve together with Zayn's family.

In January 2013, photographs of Zayn asleep in bed were leaked online by a waitress claiming to have slept with him. The claims were never confirmed or denied and 'Zerrie' continued dating. They celebrated their first anniversary in Paris in April 2013. In June, Zayn and Perrie got matching tattoos and Zayn got an arm tattoo of a woman wearing a beanie, which he confirmed as Perrie a few months later.

Zayn and Perrie's engagement was confirmed on August 20, 2013, at the premiere of One Direction's This Is Us documentary film. In February 2015, Zayn was embroiled in another cheating scandal when pictures of him holding hands and hugging a woman surfaced online. Zayn tweeted angrily about the accusations saying "I love a girl named Perrie Edwards". He was signed off from One Direction's On the Road Again Tour the next day and exited One Direction permanently a week later. All appeared well between Zayn and Perrie through to June, where a video of Perrie referring to herself as "Perrie Malik" was released.

On August 4, 2015, Perrie confirmed to E! News that she and Zayn had split up. Media reported he had broken up with her via text message, but Zayn denied these claims to Fader Magazine in November. Perrie also denied Little Mix's song Hair was written about Zayn, as writing took place before they split up. Little Mix continued an amicable relationship with One Direction.

In 2016, Little Mix released "Shout Out To My Ex" a song depicting the recovery process after a bad breakup. The lyrics mention "thank you for the tattoos" and "it took four long years to call it quits", leading media outlets to report the song was partially about Zayn. The music video depicts the band throwing various items from their car, including a teddy bear holding a love heart, which was a gift Perrie received from Zayn. In late 2016, Zayn covered his arm tattoo of Perrie.

Perrie is currently in a relationship with football player, Alex Oxlade-Chamberlain.

Similar to the speculation surrounding Harry's relationship with Caroline Flack, certain fans believed Zayn and Perrie's relationship was a publicity stunt. Both Little Mix and One Direction were managed by Modest Management, signed to Syco Music and both groups were put together during The X Factor's bootcamp stage. Most of Little Mix's promotional interviews through 2013 and 2014 focused on Perrie's relationship with Zayn, which led fans to speculate whether his name was being used to make Little Mix more famous worldwide. These fans felt Zayn and Perrie's engagement occurring just before the premiere of One Direction's concert film This Is Us was very convenient, and noted how awkward the band appeared to be when asked to comment in subsequent promotion interviews. An offhand comment from Liam that he needed to "look after" their rings because "they're gonna get lost" and a comment from Perrie about Zayn wanting no involvement in the wedding planning[3] also raised suspicions about the wedding's authenticity[4]. Zayn's break up with Perrie occurred six days after Zayn officially exited Syco Music and signed with RCA Records, leading fans to believe this proved the relationship was a contractual publicity agreement with Syco. 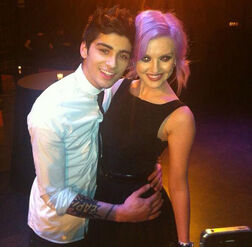 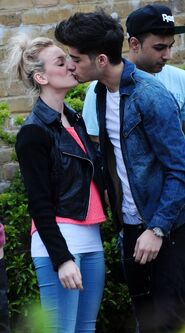 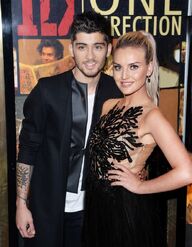 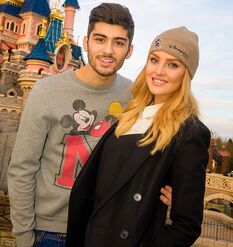 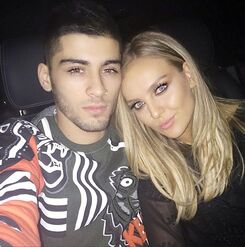 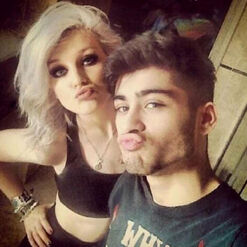 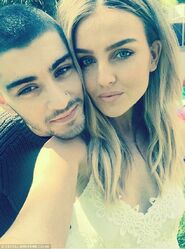 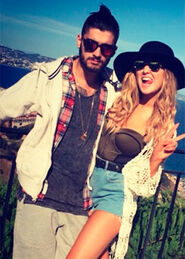 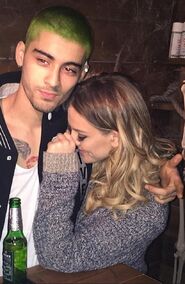 June 2015
Add a photo to this gallery

Retrieved from "https://onedirection.fandom.com/wiki/Perrie_Edwards?oldid=82766"
Community content is available under CC-BY-SA unless otherwise noted.