Start a Wiki
Teen Choice Awards is an awards show held every year in Los Angeles, USA and airs on the FOX Network. The awards are voted for by teen fans, aged 13-19, on the online website. There are awards for music, film, movies, sports, television, fashion and more. The award comes in the form of a surfboard with the designs of that year.

One Direction won their first Teen Choice Awards in 2012.

One Direction won all awards they were nominated for:

The group opened the show with a performance of "Best Song Ever", the song's debut live performance. A memorable moment was the hosts of the show making Harry Styles twerk. The band's appearance at the ceremony came just after they had finished the North American leg of their "Take Me Home Tour" and were preparing to fly back to the UK for their This Is Us movie premiere.

One Direction accepted the awards via a pre-recorded video.

Louis Tomlinson attended as a solo artist, performing Back To You with Bebe Rexha.

Louis Tomlinson was in attendance to accept his award. 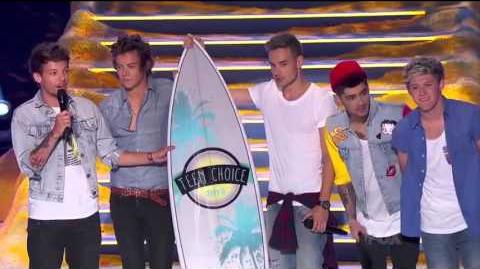 One Direction Win Big at Teen Choice Awards, Plus "Best Song Ever" 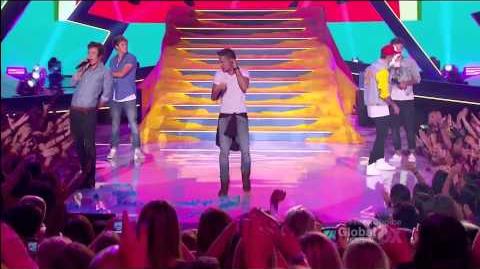 One Direction at Teen Choice Awards 2015
Add a photo to this gallery
Retrieved from "https://onedirection.fandom.com/wiki/Teen_Choice_Awards?oldid=82628"
Community content is available under CC-BY-SA unless otherwise noted.