This Is Us, previously known as 1D3D movie, is One Direction's theatrical 3D concert film. Morgan Spurlock directed the film, and also produced it along with Adam Milano, Ben Winston and the band's co-founder, Simon Cowell. It is distributed by TriStar Pictures and released by Sony Pictures/Columbia Pictures.[1] It was announced for the first time by Niall in New York's Rockefeller Plaza, during the Today Show, on November 12, 2012.

Not long after being announced in New York, One Direction began to film the movie in Tokyo, Japan on January 17, 2013. Two days later, during the Team 1D Japan Party, they performed One Way Or Another (Teenage Kicks), in front of a large audience, which was later revealed to be part of the film.

The official movie website[2] went up and included a fan mosaic, an interactive poster of the movie that contained thousands of photos submitted by fans of themselves. There was also a meme creator, exclusive photos, videos and much more on the website.

After the release of the trailer on their Vevo a few weeks later, the title was guessed to be "1D3D", although it wasn't until March 18, 2013 when the boys revealed the official title, "This Is Us", on their Twitter, with help of some fans.

A press conference was held in the morning of Monday August 19, 2013, one day before the worldwide premiere of the movie in London's Lecister Square. There were oppurtunities for photos with the movie's director Morgan Spurlock and a press conference. Afterwards, there were chances for more casual interviews with Harry and Niall together and Zayn, Louis and Liam together.

There was a twitter Q&A session held on the official This Is Us twitter account with each of the boys using the hashtag #1DMovieChat the night before the London premiere on August 19, 2013. First Zayn, then Liam, then Niall, then Louis, then Harry and Morgan Spurlock, the director of the movie. The question would be retweeted then the answer was written by This Is Us twitter account an signed off with the boy's initials.The chat began at 7:15 PM and ended at 9 PM (BST).

On the November 9, 2013, Niall confirmed, via twitter, that a special edition of This Is Us with 20 extra minutes and 4 songs from their previous albums Up All Night and Take Me Home was going to be released in US and Canadian cinemas[3]. He did add however that it would be available in more countries "soon"[4]. It was released in the United Kingdom and Europe on September 19th.

The official Amazon link[5] was released in a tweet from the official One Direction twitter account[6]. The DVD was available for pre order from September 30, 2013. It was released in several countries on December 16th in three different editions:

Fans camped overnight before the London worldwide premiere of the movie in Leicester Square, London. There was an official Livestream by Yahoo which began at 5pm on August 20, 2013.

The hashtag #1DMoviePremiere was used to represent the premiere on twitter and around 3.6 million tweets used the hashtag and terms such as "London" and "Leicester Square" were trending for the duration of the day[7].

The boys arrived at 5:45 PM and other stars that walked the carpet include Little Mix; McFly; JLS; various youtubers such as Zoella, Alfie Deyes, Tanya Burr and Jim Chapman; Ronnie Wood and many others. The premiere ended at 7:20 PM when everyone had been admitted into Empire cinema where the film was to be shown.

It was held on August 26, 2013 in New York's Midtown district and the premiere had brought the whole area to a "standstill". Some girls had been waiting for a number of days beforehand to get up close with the boys and there were thousands of screaming fans that greeted them. The boys arrived on the "black carpet" infront of the Ziegfeld Theatre, where the film was to be shown.

Other stars who walked the red carpet included Hailey Rhode and Stephen Baldwin, Perez Hilton, Kendall Schmidt (of BTR) and Emma Kenney (from Shameless) as well as many others. 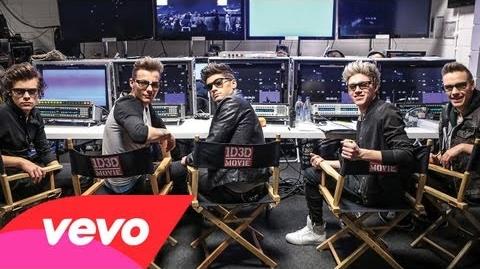 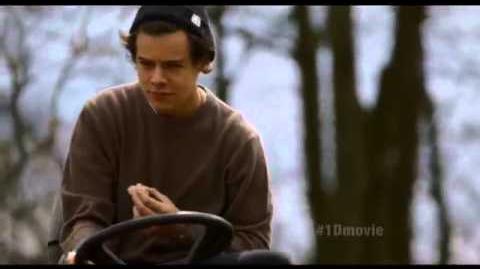 One Direction - This Is Us - Harry Styles 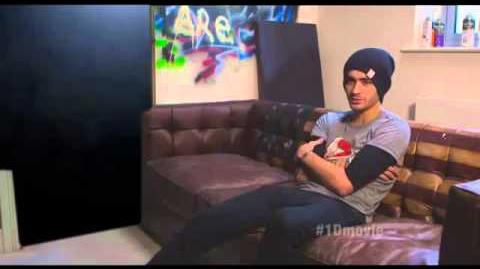 One Direction - This Is Us - Zayn Malik 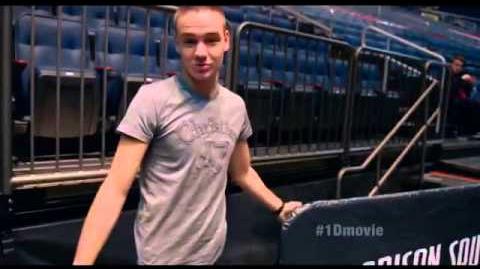 One Direction - This Is Us - Liam Payne 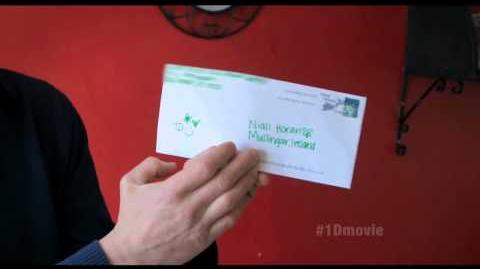 On February 8th, Daybreak premiered a short trailer of the documentary where you could see small scenes of One Direction having fun, telling their stories behind the camera and working on their presentations. Two day later, it was officially released on their VEVO.

The full trailer was released on June 25th on VEVO. The trailer also revealed a new song named "Best Song Ever" which features in the movie. Simon Cowell, the boy's mums and fans all appear in the trailer.

There were also short trailers released just 1 week before the worldwide premiere in London. First Louis'[8], then Niall's[9], Harry's[10] were released on August 15, 2013.

The world premiere of the film was held in Leicester Square, in London on August 20, 2013. The film was released in the United Kingdom on August 29, 2013, and was rolled out internationally on August 30, 2013 with a majority of markets being reached by the end of September 2013.

The film scored $2.7 million on its Thursday debut, and topped the box office on its opening weekend, earning $17,000,000, far better than other concert films like Katy Perry: Part of Me, Glee: The 3D Concert Movie, and Jonas Brothers: The 3D Concert Experience, but not enough to surpass Justin Bieber: Never Say Never, Hannah Montana & Miley Cyrus: Best of Both Worlds and Michael Jackson's This Is It. This Is Us is the third concert film to top the box office, after the Hannah Montana and Michael Jackson films.

According to Forbes, the film would top the box office on its opening weekend with an estimated $18 million. The Hollywood Reporter said the film would earn about $45 million in its four-day debut.

The film has been a box office success worldwide, grossing over six times its budget.

The Caret (^) represents the shipments figures based on certification alone.

The sequel to This Is Us entitled One Direction: Where We Are - The Concert Film, was announced on 21 July 2014. It premiered in cinemas worldwide with a limited engagement for 11–12 October 2014. The sequel was filmed at Stadio San Siro in Milan, Italy on 28–29 June 2014, during the band's Where We Are Tour. The film was released on home media by December 2014.

Retrieved from "https://onedirection.fandom.com/wiki/This_Is_Us?oldid=79506"
Community content is available under CC-BY-SA unless otherwise noted.